Our journey may be over, but we are just getting started. Planning for the future is imminent. But first, we must spend time to reflect over the successes and areas where we have room for improvement. This takes thoughtful reflection and collaboration with our partners and feedback from our team of how to make this bigger and better next year.

I have really enjoyed being a part of the SAIL MED team and I hope to be able to come back and do this again with my awesome crew. I can never forget the experiences and memories that I have gained here in Greece with friendships that will hopefully last a lifetime.

We cannot change that which is immovable, but maybe we can maneuver around it to find new ways to grow. The meaning behind this is that sometimes it is better to think outside of the box to realize it may just be a relic of the past that needs to be admired from afar.

Thank you for following the journey. This is just the beginning.

Jessica and the SAIL MED team

Lying under the Sails as we pulled up to the port near Athens…. 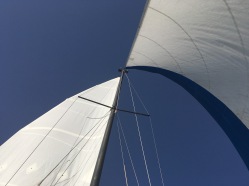 We finished our island deliveries on Kea at Aristaios’ local shop, with products from Samos, Ikaria, Mykonos and Andros. While walking along the mountain road to the shop, we also had the privilege to visit a small donkey refuge.

Eva, who established the refuge, explained to us how donkeys, which can help carry products if properly cared for, have often been neglected or misused.

Eva gave us a nice lesson on how to care for the donkeys. They  also have a certain carrying capacity. One of her donkeys showed us, while carrying Aegean Cargo Sailing products, how he can be respected and utilized in the right way.

Aristaois‘ shop is beautifully designed. If you go there hungry you will leave like we did – with our bags full. We spent much time resting from the trek up the long mountain road with the products, toasting to a sweet refreshing liquor that he makes, and learning about many amazing products derived from Kea’s special island elements.

And I realized that the excellent and the admirable are the Greek island producers. They sail against the odds (and defy the Greek crisis) to craft amazing, healthy products for  searching souls like us who love to taste and experience what’s truly local. 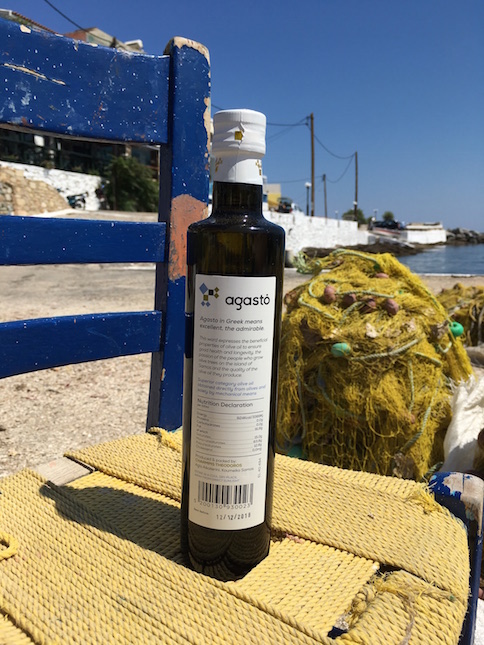 This morning we delivered an awesome package of sail transported products to a shop in Armenistis, Ikaria. The package included ‘Agasto’ olive oil and soaps from Samos; wine and a pasta made of acorns (that’s right, acorns!) from Kea; craft beer from Mykonos; special honey from Andros; biologic oils from Tinos; and more scrumptious surprises.

We transformed a little corner of the shop into a sail transported display of Greek islands gastronomic greatness! 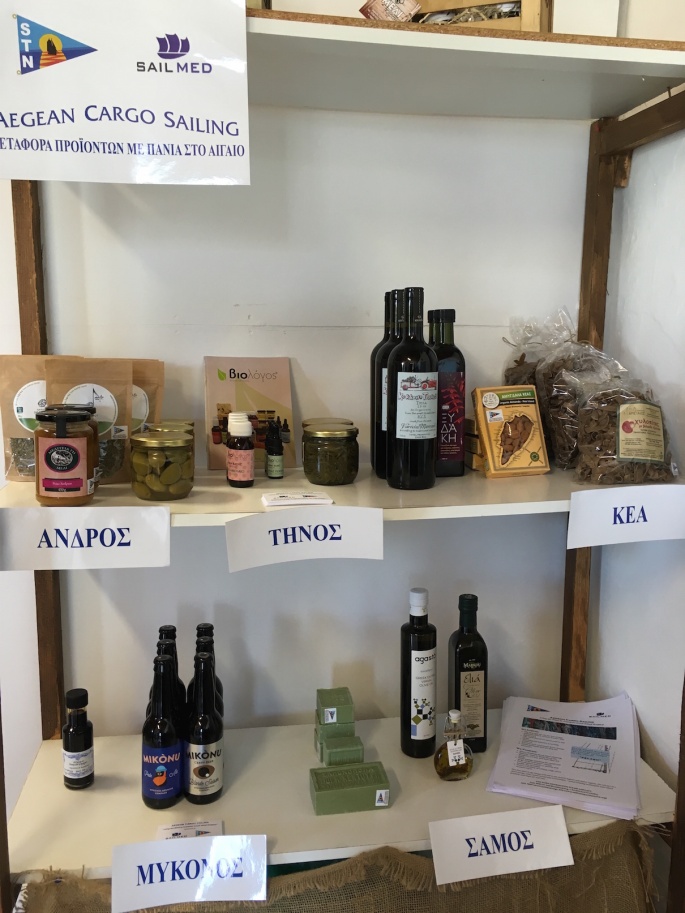 And yesterday, having a bit of downtime, Jessica and I made use of another type of clean energy power on Ikaria – HORSES!

The cargo sloop Pelago had ideal sailing conditions on Sunday from Ikaria to Samos, a five hour romp.
We anchored off a nice beach and swam off the boat. That night the katabatic winds started and pushed us out to sea a few dozen meters. The next morning after a swim we sailed through stronger katabatic winds to Ormos, a small port. Valia and Dafni met up with us and loaded the olive oil soap on the Pelago.

Today we toured the nearby soap factory, and back at the vessel Dafni did a great video interview with Capt. Loucas.
Valia went through the cargo, sticking STN’s “Sail transported” labels on the packages and bottles,  and she prepared boxes for island shops based on their stated interests. It was a good day, especially when I got two swims at the adjacent beach.
– Jan Lundberg

Ikaria Island has a harsh rocky shoreline that keeps away cruise ships and larger crowds. As a result, this ‘island of longevity’ (as termed by National Geographic) has a unique local culture that’s tranquil, quiet and blessed with fertile mountains.

The Pelago first docked at Ikaria’s small fishing port of Galiskari, to pick up a box of sweet products from a recently opened Ikarian Honey shop in Armenistis run by Evangalos. From there, the winds used her gentle hands to push the Pelago eastward along the coastline, sailing at a leisurely 3 knots. (This area of the Aegean is known for stronger and more capricious winds.) At the port of Karavostamo, we met Stamatoula, who lives with her boyfriend in an old stone house way up in the mountains. She is known for her special carob syrup that’s in demand by local shops. 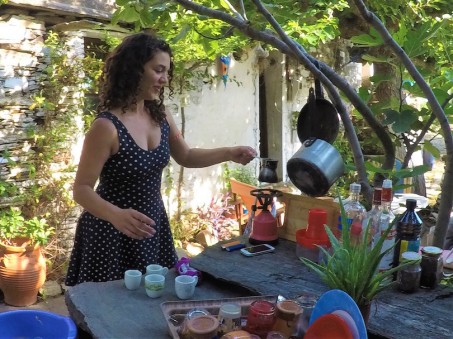 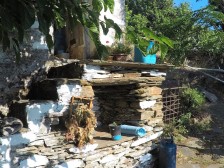 After loading a box of her syrup onto the Pelago, we joined her for a coffee and dinner at her house in the mountains.

Stamatoula explained to us how she renovated the stone house of her grandfather. She still awaits electricity in one part. Her cozy grounds are a hidden slice of paradise. The terraces are scented with flowers, herbs, and also a vegetable garden. Stamatoula keeps beehives on another terrace in the back of the house.

We were treated to an unforgettable dinner, tasting her cured olives, ladling out a fresh fish soup, drinking local wine and the tsiporo of her uncle. The hours passed in the way they should, with warm hearted conversation. Then we all stood together to witness an incredible sunset – followed by shared efforts to identify some planets, shooting stars and the constellations of the heavens.

I could say that we concluded the night then; however, Stamatoula was wide awake and invited us to join her at a festival in a nearby village celebrating a baptism.

We had the pleasure of a brewery tour of Mykonos Brewing Company where Angelos, Janos and Yanis are brewing up some delicious beer. Please check out our post on Instagram for more information at:

And an update from the Captain:

With time in port, I visited Mykonos’ little archaeological museum.  A temporary exposition of ancient to contemporary jewelry named ‘Vanity’ was exquisite. If you keep your head up, traditional architecture along the little paved streets of Mykonos town was there to enjoy .

By 18.30 the north wind died down as I sailed past the port entrance lights. In medium winds, a local wind eddy canceled the north wind in the bay out of the port. Finally I past by sunset the sacred island of Delos and turned around the southwest cape aiming to anchor close to the south east tip for an early start the next morning to Ikaria. The katabatic winds played again all sorts of games.  They came from separate valleys where they blew hard and I could sail fast; in between, they met and cancelled each other.

This morning I made sure I sailed as far as possible from the hill of Profiti Ilia to avoid its katabatic winds.  I used their tail end to sail faster. In the open Aegean sailing conditions were ideal. (North wind 3 to 4 Beaufort),  mini waves and great speed with the tiller tied in position so I can write and take pictures of Ikaria. Tonight I slept in one of the northern ports.

Today, the winds were not in our favor. Mykonos nicknamed the windy island didn’t live up to its name today so a normal 3 hour sail turned into an 8 hour sail. Our top speed was around 3 knots for the day, so we took the opportunity to take a plunge into the Aegean and enjoy the cool blue waters that nature provided. Charlene and I brushed up on some of our sailing skills while learning some new tricks.

It has been a long day of sailing, so I hope you appreciate these photos that capture the beauty of this journey towards spreading the sustainability mindset across the world from port to port.

With Love From Ellada,

Yesterday at the end of afternoon I made a rash decision to lift the anchor and leave Andros to reach Tinos on time  for an early working day in the port and welcome the new additions to the team. The wind was north and would push the boat fast to the next anchorage or port.  The katabatic winds blowing form the mountains of Andros and Tinos made the sailing very adventurous and I had the time to curse my bad judgment. It also gave me the opportunity for a long,  high power total workout fighting the elements. Happy to end in the wee hours anchoring just south of the port of Tinos and now waiting for the wind to calm down to be able to dock. It just blew off my empty bamboo plate…

Beautiful view of Tinos and a cargo in the distance sheltering from the wind as of last night.  It’s captain slept longer.
– Loucas Gourtsoyannis 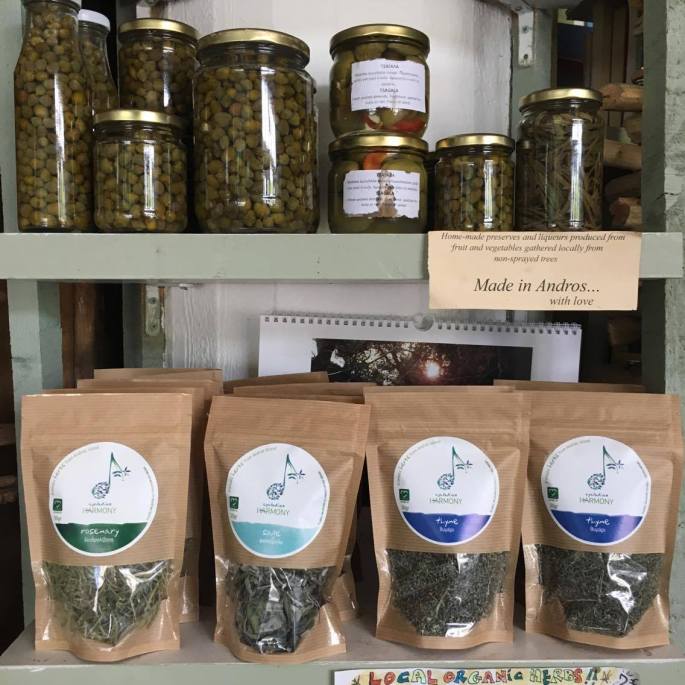 To see where we’re headed next follow our map which is on our main page.

Yesterday evening Karystos was warm,  beautiful and full of culture.  I had the chance to see the post and made it to the book presentation of “The Red Seashell” that turned  out to be a first class cultural event with live music poetry debate under the night sky in the old port fortress called the Bourtzi. (Pictures in this post are of the fortress  by day time and the night event scene plus the bougainvillea house just across the street.)

This morning the clouds started showing on the Oxi mountain north of Karystos. We waited for the wind to start at mid day but it was capricious as usual.  Nothing getting out of the Port. Then little breeze blowing on and off in all directions. Then a nice little wind took us to tip of Kafireas cape and true to its reputation it blasted us with the north wind with no warning.  By now the clouds hid half the mountain and we had our 5 baufor to blow us swiftly while shaking and drenching us across to Andros in just three hours. The sky is covered,  the wind blows hard on our anchoring spot, the ferries come and go and a war boat is sheltering close by.  Tomorrow we will load up Andros. products.

“Happy is the man, I thought, who, before dying, has the good fortune to sail the Aegean sea.” – Nikos Kazantzakis